There has been a church on St Chad’s site for over 1100 years. It features in the Doomesday Book and the font that stands at the back of the current Victorian church was made before the Norman conquest.

People in Kirkby have been baptized in the font (left) now situated at the back of St Chad’s since Saxon times. This is the oldest object in the town that has been made by human hand. Many people who come and view it find their spirits stirred by the thought that families have gathered around it to dedicate their children to God for over 1000 years and we continue to do so today.

In the grounds of St Chad’s, between the church and Old Hall Lane, the foundations of an earlier church can clearly be seen. At one end of the church is the remains of a small plinth where St Chad’s font once stood – near where the door would have been. At the other end is a monument where the altar once stood. The monument reads in English and in Latin,

“Here for a thousand years stood an altar to the Lord. I see that all things come to an end.”

In today’s context this sounds very defeatist. This monument was actually erected as a huge new church was being dedicated to replace the small sixteenth century church that had been its immediate predecessor. To the Victorian reader it would have read in a very triumphant way. 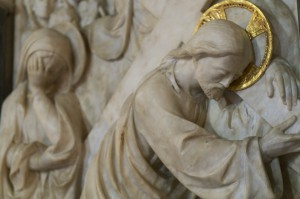 You can make a donation to St Chad’s by visiting http://www.justgiving.com/stchadkirkby
or send a text to 70070 and type: chad99 followed by the amount you want to give between £1 – £10.

This site uses Akismet to reduce spam. Learn how your comment data is processed.